A Family Holiday at Freshwater Bay

HF Holidays’ Sarah Szczepanski took her family on holiday to Freshwater Bay House on the Isle of Wight on a Family Walking Adventure Holiday– her first time visiting the island. Here she reflects on their time away.

Following a short drive from the Isle of Wight ferry terminal, my husband, 5-year-old son George and I arrived to see a large playground in the front of the country house and a field to the side with an amazing view of Freshwater Bay. Just stunning and a very promising start to our holiday! 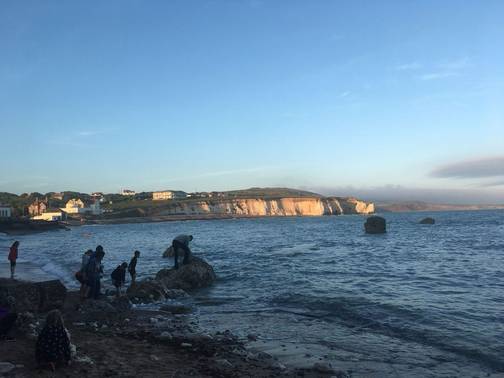 We were greeted by a lovely welcome, shown our rooms and left to settle in. The first priority for George was to go and find his friend who he’d met the previous October on a walking holiday at Malham. Then it was straight to the outdoor pool. Note to self: pack the swim gear separately next time to stop me having to find everything quickly with an impatient 5-year-old keen to get going!

After a swim, it was time for afternoon tea and a chance to meet some of the other guests. The lounge overlooks the sea and with table tennis at the end of the room, there were plenty of opportunities to join in and get to know other kids and parents.

Following a talk describing the next day’s walks, it was time to sit down and enjoy a fabulous 3-course meal in the company of other guests – another great opportunity for the children to start to get to know each other. After dinner there was the chance to play rounders and for the children to listen to a bedtime story together – a popular activity amongst all ages (including adults!) which was repeated each evening. 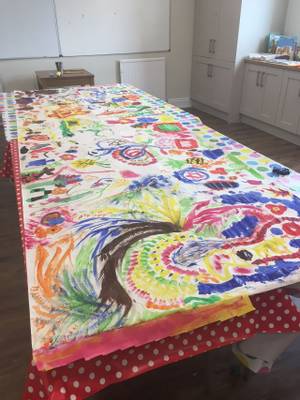 Breakfast started from 7.30am but the walk we had chosen – a family walk over Tennyson Downs – wasn’t leaving until 10am, so it was a lovely leisurely start to the day. Setting off, there was a fantastic view to enjoy looking back towards Freshwater Bay.

We arrived at Alum Bay, where you could choose to go straight back to the house on the Breezer open top bus or enjoy 40 minutes free time. We chose the latter and went to create the obligatory colourful sand ornament as a memento and enjoy an ice-cream.

Then it was back to Freshwater Bay House for a swim followed by a craft activity - a huge painting where each child could add their input, if they wanted to. They created a lovely painting that was displayed for the rest of the holiday in one of the lounges.

Later that evening we listened to the walks talk, enjoyed a delicious dinner and evening activities. Every night there were quiz sheets on the dinner tables (just for fun) – a great way to get everyone chatting while trying to work out the answers. 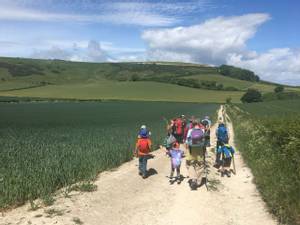 Today we chose a walk through the countryside following the Shepherd’s Trail, along an ancient trackway to Carisbrooke Castle.

There were various stops for snacks, a skipping challenge and finding sticks to decorate with leaves and pine cones and other things to remind you of the walk. We decorated ours with pretty leaves, some wild garlic and a buttercup, after first finding out who liked butter using the tried and tested method!

The walk passes through Gatcombe where we saw the Scarecrow Festival with Scarecrow versions of Peter Rabbit and Jemima Puddleduck. We reached the castle at about 1.30pm and had the rest of the afternoon to enjoy the castle grounds and take part in the school holiday activities. Watching the children learning how to do swordplay was great fun and a chance for parents to sit down and enjoy the sunshine.

Back at the house the evening craft activity was making paper plates into a design of your choice. We designed a snake and an alien before settling down to another lovely evening meal. 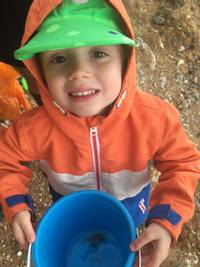 We chose to return to Alum Bay and the Needles. Our dinosaur enthusiast loved the dinosaur ride!

We spent the afternoon rock pooling at Freshwater Bay. This is right on the house’s doorstep with a gate and steps down to the beach. We made the most of low tide to look for small crabs, molluscs and sea shells.

The rest of the afternoon and evening were spent swimming, listening to the walks talk, enjoying dinner and playing in the playground. Very relaxed pace which was great!

The walk started at Bembridge Windmill, a National Trust site with the option of going inside (entry fee payable for non-members).

During the walk, the children could complete a fun nature quiz, looking for items along the way.

We stopped mid-morning at a playground, then enjoyed a walk along the chalk headland of Culver Cliff to Sandown. As it was raining, we didn’t stop as much today, getting to the end destination of Sandown so we could find a coffee shop to stop in.

We chose to visit the Dinosaur museum and find out about fossils found on the Isle of Wight. It made someone’s day!!!

The walk leaders went beyond the call of duty today, coming to find us in the museum to let us know there would be a coach back an hour earlier than planned as the weather wasn’t being kind.

Upon return we had time for a rest, then the evening craft was clay modelling or making amazing tissue paper flowers. One of the children taught others to do the flowers once she’d got the hang of it herself – great teamwork! There was also paper plane making and a giant painting made of hand and footprints. I enjoyed the craft activity today as did George who made a clay snake and a paper plane.

We listened to the walk talk and went through to dinner. George decided he wanted to sit with his friends and so we had our dinner just with adults on our table that night.

We walked along the promenade from Bonchurch to Ventnor. The walk included seeing an area which is kept like a nature reserve for the rare caterpillars which live there. We had a minibeast quiz to complete as we walked along which both adults and children enjoyed taking part in together. 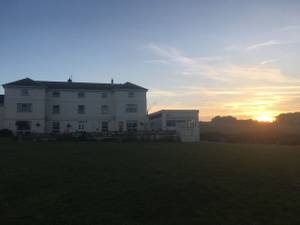 We had a stop for 40 mins at the paddling pool in Ventnor with a model of the Isle of Wight in the middle of it. This was followed by a walk to Steephill Cove for a play on the beach. There were loads of huge rocks to climb and hide amongst, an ice cream opportunity and a chance to paddle in the sea.

The bus took us back from Ventnor Botanical Gardens to the house, where there was time for a swim before watching the evening entertainment. Tonight we had an entertainer do magic and balloon modelling which kept the younger children amused for an hour. It was great fun and generated a real party atmosphere.

After dinner, the firepit was lit on the beach to toast marshmallows after which we headed indoors for hot chocolate, biscuits and story time.

We enjoyed a gentle walk to Yarmouth through a nature reserve. There was plenty of chatting and playing along the way followed by a brief stop in Yarmouth to see the boats (and get an ice cream). We returned to Freshwater Bay on the coastal bus.

The evening activity was face painting and boat model building ready for the boat race on the swimming pool which got the children very excited! George held the finish line with me and after an exciting race, the winner proudly received their medal.

The last evening meal was great fun with party poppers, glow sticks and party blowers. Later that evening, the walk leaders handed out certificates to the kids for the total number of miles walked over the holiday. The distance ranged from about 16 to 45 miles! A the kids were pleased with their certificates; George took his into school and showed it off during assembly.

After the final evening meal, there was a talent show where the kids (and adults) could take a turn or just watch. This was all just for fun and very enjoyable.
The table tennis tournament which had been going on most of the week came to a close and there was the usual playground fun to enjoy.

Homeward bound so saying goodbye to new friends after exchanging details. All in all, it was a thoroughly enjoyable week full of smiles and happy faces at the end of each day.  The friendships formed so quickly; it was a holiday we will never forget. George has already asked to go back and see his new friends!