Sitting out in the Atlantic Ocean, 350 miles West of Mauritania, the 10 islands that make up Cape Verde provide a winter sun island escape that’s hard to beat: this volcanic archipelago has a tropical climate where the winter temperature is reliably around 25°C.

Each island has its own treasures, waiting to be discovered on an exciting Cape Verde walking holiday. The largest island - Santiago – has a mixture of green agricultural land where crops of bananas, sugar cane and mango thrive – but its interior is home to arid mountains. Sao Vicente is considered to be the cultural hub of the islands; in Mindelo – its capital - music emanates from open doorways into the streets all day long. Santo Antao is only reachable by ferry; its towering green peaks, fertile volcanic craters and rugged coastline make it a fantastic destination for walking.

When it’s time to rest, there are endless pristine sandy beaches to choose from. Simply kick back, grab a piece of sun-ripened fruit and savour its sweet, juicy flavour bathed in glorious sunshine. 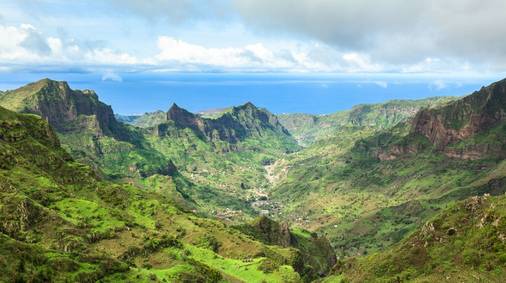